Journey to the heart of our cultures 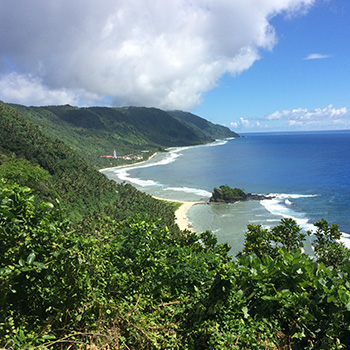 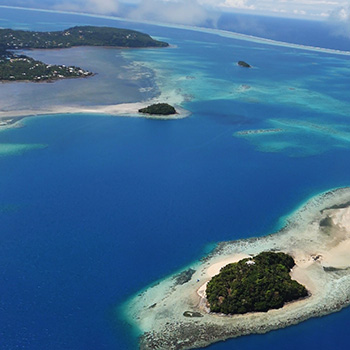 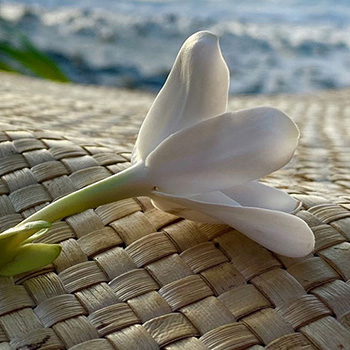 Enjoy a good breakfast to get your energy levels up, then head south-southwest for a trip to Lake Lalolalo. From the lookout point, gaze at stunning views of one of the Pacific Region’s largest volcanic crater lakes. Set in spectacular scenery and rimmed by sacred rainforest (vao tapu), sheer rocky cliffs fall forty metres to the inky green waters of an eerie lake forming an almost perfect circle with a diameter of 400 metres. At least 80 metres deep, the lake hides its secrets well and is home to a species of blind eel found nowhere else in the world!

When you reach the end of the track leading back to the RT1 main road, turn off towards Vaimalau and head for Lausikula hamlet. At the foot of the cliffs, overlooking the sea, stands the impressively grandiose Basilica of St. Bernadette. Although it was built only recently (2014), you’ll be captivated by the basilica’s setting and architectural design.

Carry on towards Kolonui Tongan Fort, a ruined medieval fortress built around the elevated mound called Talietumu (a Marae or Mala´e or “Sacred Place”), bearing silent witness to the power and majesty of these conquerors of the South Seas. The fort dates back to the mid 15th century and forms part of a series of fortifications built in the southern half of the island, representing one of the Pacific Region’s most extensive walled complexes. The Talietumu mound, located at the southwest corner of the fort, forms only a small part of the complex.

Round off your tour with a visit to the Church of St. Joseph, Uvea’s oldest church, in the village of Mala'efo'ou. The interior is intricately decorated with biblical scenes and frescoes of fish and seashells reminiscent of the patterns often seen in traditional tapa cloth.

Although medieval Gothic in inspiration, the church dates back to the early 19th century and is built entirely of dressed black volcanic rock and white coral limestone. In the words of Monseigneur Bataillon, first missionary and bishop of Wallis, later the vicar apostolic of Central Oceania, “there is nothing to equal this monument in the Vicariate, or even, I believe, in all Oceania”.

If all this sightseeing has left you feeling a bit peckish, nip across the road and treat yourself to some Asian cuisine at the You You snack bar. Relax on the restaurant’s seafront terrace and enjoy lagoon views as you savour your meal!

As your plane approaches Wallis (Uvea in the local language), you’ll be enchanted by the glorious views of the lagoon, sparkling with countless tints of azure and cerulean blue, encircled by a coral reel protecting the lagoon from the tumultuous Pacific Ocean.

No stay in Wallis is complete without a day spent exploring the islets. 14 dream islets floating in the lagoon surrounding Wallis can be reached by taxi-boat, with most boasting facilities for visitors. Each islet has something different to offer, so you can choose from a host of activities for your outings: snorkelling in the pristine lagoon wonderland, stunning viewpoints, beaches of fine white sand, chapels, visits to the coral reef, and even everything you need for a night camping out under the star-studded Pacific skies! Don’t forget to pack a picnic so you can make the most of your idyllic day in the ultimate picture-postcard setting!

You can also set off in a kayak or catamaran from the watersports centre and spend the day exploring the lagoon before stopping off at the islets.

There is so much to see and do that there really is something for everyone!

On the American trail

You’ll find traces of the US army’s stay all over the island. Wallis served as a military base for American troops stationed in the Pacific to curb Japan’s advance during World War II. Around 6,000 US soldiers spent two years based in Wallis, leaving behind many traces of their time on the island.
Set off to explore these fascinating reminders of WW2, learn about their history and explore the bunkers and other buildings left behind by the US army. Enjoy a relaxing lunch by the lagoon at La Paillote restaurant as you imagine how these American soldiers felt as they landed in Gahi Bay. If you look carefully, you’ll find visible evidence of their arrival here.

Although most US army-linked sites can be easily accessed, we recommend you get in touch with the Uvea Museum Association who will be delighted to guide you on a tour of the US army trail, finishing with a visit to the museum itself.

In the context of the current COVID-19 crisis, access to the Wallis and Futuna Islands is restricted until further notice. Passengers from New Caledonia only are allowed to move freely within the islands, with no specific health restrictions. For further information, please go to the FAQ section under the Useful Information heading.