The island of Futuna lies in the Pacific Ocean, northeast of Fiji, northwest of Tonga and west of Samoa, and forms, together with Alofi to the southeast, the Hoorn Islands archipelago. The Futuna archipelago, lying 230 km southwest of Wallis, comprises Futuna island (84 km²) and Alofi island (35 km²). The two islands are separated by a 1.5 km wide ocean channel. These two tiny islands are surrounded by variably developed fringing reefs of varying width (50 to 100 metres). The only break in Futuna’s fringing reef lies opposite the estuary of the rivers, providing safe anchorage at Leava, the principal town. In 2018, the population of Futuna numbered 3,225.

Nearby Alofi is almost uninhabited (only one inhabitant recorded in 2018). On the western tip of the island lies Loka Cave, a place of pilgrimage for the Futunans, and a source of fresh water.

Futuna is a French Catholic Polynesian island, settled 3,400 years ago by the prehistoric Lapita people, ancestors of historic cultures scattered throughout the Pacific Islands.

Attempted Tongan invasions of Futuna were fought off during the 15th and 16th centuries but Samoans settled there in the 17th century. The kingdoms in existence today came into being in the 18th century.

The head of each kingdom is the “Aliki sau” (king in English). Both kings have executive authority over customary issues. Civil or customary justice is administered by local courts known as fono. Decisions concerning the economy are currently taken by the Territorial Assembly in consultation with the Higher Administration, representing the French Government.

Each king is assisted by 5 ministers, the “Aliki Fa'u” and a police chief, the “Sa'akafu” (in charge of ensuring public order and the supervision of village chiefs, the “Aliki tausi kakai”).

Tuiagaifo is customary king of the kingdom of Alo, while the king of Sigave is known as Tuisigave or Keletaona, depending on which royal family he represents.

Custom is a fundamental part of the daily lives of the Futunans. Some people see it as epitomizing dances, language, music and crafts. Some see it as symbolising the kava ceremony, the Katoaga, and all aspects of island traditions. And for others, custom represents the essence of the traditional chiefdoms.

Custom or the “Aga'ifenua” plays a profound and everyday role in the lives of the Futunans; it has remained vibrant and unchanged despite contact with Europeans.

Custom and customary gestures lie at the heart of many practices and actions.

For historical reasons, the customs and language of Futuna bear a close relationship to those of Samoa.

Futuna is France’s most remote Overseas Collectivity, located over 16,000 kilometres from mainland France in the heart of the Pacific Ocean. Having been spared the evils of mass tourism, the island possesses unique attractions for the discerning traveller. 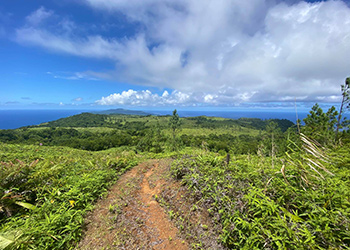 Futuna and Alofi are volcanic islands without lagoons, boasting stunning mountainous terrain rising to 524 m. The perfect destination for keen hikers and lovers of the sea: magnificent viewpoints from on high and thrilling ocean fun.

Futuna has a tropical maritime climate, warm and humid; there is no dry season. Minimum and maximum temperatures range between 22°C and 32°C all year round.

Annual rainfall is greater than 3,000 mm. There are frequent but brief rain storms, over almost as soon as they begin.

The cyclone period lasts from November to April, with a low to moderate risk of cyclones.

Futuna has no lagoon but plenty of magnificent virgin beaches, fringed by rocks hollowed out by the waves of the sublime Pacific and commanding views of uninhabited Alofi island.

Futuna’s highest mountain rises to 524 metres and the imposing mountainous terrain is dotted with plateaus and breathtaking viewpoints over landscape and ocean.

Alofi is a paradise of idyllic beaches, boasting just one inhabitant! Various portions of land are owned by families who frequently come over to care for their crops.

Futuna offers a variety of accommodation options, from hotel to bed and breakfast.

For a pleasant stay on the island, you have the choice between the Somalama Park or Fiafia hotels. For a weekend or budget holiday, Mani Gîte is the ideal option.

A stay on this island paradise is your chance to sample delicious dishes with an exotic twist served up by authentic local restaurants. You can savour tempting dishes and snacks at Bambou bar and Snack Non Stop. The island’s two hotels also offer catering services.

To start planning your trip, check out the sports & leisure activities, must-dos and suggested tours on the island of Futuna.