Wallis, (Uvea in the Wallisian language), is an island in the Pacific Ocean, north-east of Fiji and west of Samoa. Located about 230 km north-east of Futuna, Uvea is one of the three customary kingdoms of the French Overseas Collectivity of Wallis and Futuna. The capital is Mata'Utu and the island’s population numbered 8,333 in 2018. The archipelago has preserved its “off-the-beaten-track” beauties and natural environment. 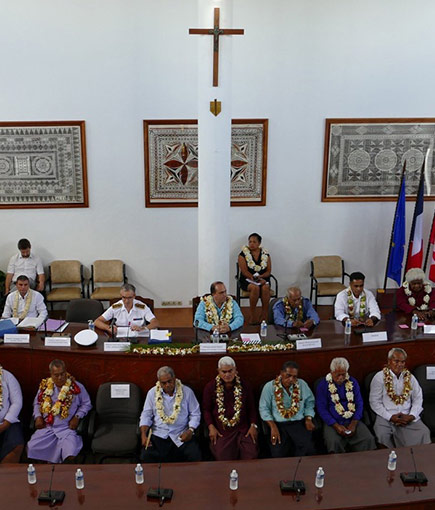 Wallis is a French Catholic Polynesian island, tracing its history back to the early Austro-Polynesian peoples, to seafarers from Tonga, Samoa and Fiji and, more recently the influence of European missionaries and encounters with US troops during WW2.

Wallis was populated 3,400 years ago by the ancient Austronesian Lapita people, renowned for their distinctive pottery, remnants of which have been found throughout the Pacific Region.

The Tongan empire extended its influence to Uvea (Wallis) in the 15th century. Close ties with Tonga were maintained over two centuries and led to the establishment of a pyramid-type chiefdom system which remains to this day.

British navigator Capt. Samuel Wallis visited Uvea in 1767 and gave his name to the island. Explorers have also called Wallis “The Consolation”. The first Europeans to settle permanently in the two islands were Marist missionaries, who first landed in 1837 and set out to convert the population to Catholicism.

By 1842, Wallis had completely adopted Catholicism.

In 1887-1888, a Protectorate Treaty was concluded with France on the initiative of Queen Amelia; thus Wallis & Futuna were never colonised.

US army forces occupied Wallis from 1942 to 1946 and built defences and infrastructure still in use today (roads, airports, wharves...). The Uvea Museum Association invites visitors to view a fascinating collection recalling WW2 in Wallis, the US army and their lasting effects on the island and its inhabitants. 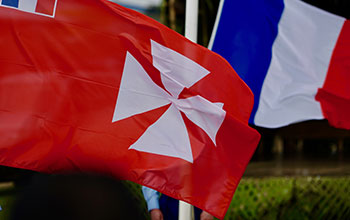 A referendum was held in 1959 and the residents of Wallis & Futuna voted near unanimously to become an integral part of the French Republic as an Overseas Territory. Since 2003 Wallis & Futuna has been an Overseas Collectivity. The people of Wallis vote in French Presidential elections and have a Député (MP), a Senator and an Economic, Social and Environmental Councillor representing them in France’s 3 key parliamentary bodies.

The island of Wallis comprises 21 villages grouped into 3 districts: Hihifo district in the north, Hahake district in the centre and Mua district in the south. The “Lavelua” (king in English) is head of the kingdom and is assisted by his Prime Minister, the “Kalae Kivalu” and by customary ministers and village chiefs. It is a striking and surprising fact that the French Republic recognizes the monarch and his government who play a key role in decisions and daily life.

Each king has customary and administrative duties and responsibilities and is a member of the Territorial Assembly, which is required to express an opinion on all political decisions before they enter into force. The chieftaincy also has jurisdiction over the land and is empowered to settle all disputes involving land and property belonging exclusively to Wallisians.

The 3 district chiefs, the “Faipule” are appointed by the ministers from amongst the reigning lineage families. They have authority over the village chiefs, the “Pula kolo”.

Visitors to Wallis will discover a vibrant and intact Oceanian social system existing alongside modern French social and political institutions.

Custom is deeply entrenched in the daily lives of the Wallisians. Some people see it as epitomising dances, language, music and crafts. Some see it as symbolising the kava ceremony, the Katoaga, and all aspects of island traditions. And for some people, custom is the essence of traditional chiefdoms.

Customary gestures give individuals the means to help each other and maintain balanced relationships within and between families, villages and districts. A customary gesture involves an exchange of gifts, the value of which depends on the purpose of the “gesture” and the status of the recipient (kava root, tobacco, a bottle of alcohol, an envelope containing money...). 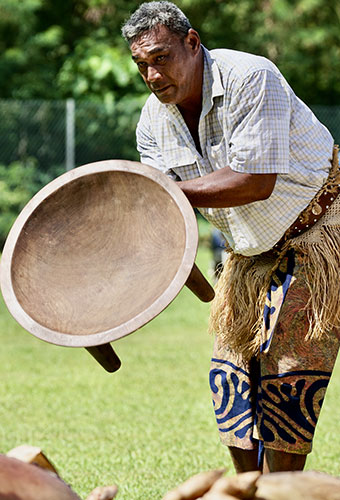 Custom provides the basis for many actions, and issues are settled through “customary gestures”.

Custom is deeply rooted in authentic, vibrantly alive cultural traditions which have been preserved to a far greater degree than in many other Pacific Island countries.

Given the historic background of the islands, the customs and language of Wallis are imbued with a strong Tongan influence. Excellently preserved traces of historic Tongan settlements can still be seen in Wallis, and the Tongan language has left a mark on the names of villages and districts. The occupation of the island by US troops from 1946 to 1956 also left behind a few linguistic influences on Wallisian, with words invented for previously unknown objects. The word “pipi” means beef, a “pila” is a pillow and “puna” means a spoon...

Wallisian has a few sounds that you may have trouble mastering: an extra consonant, the apostrophe or glottal stop at the beginning or in the middle of a sentence, and the “g”, pronounced “ng” at the beginning of a word. Ask someone how to get to Gahi Bay (“Ngahi”), then ask your informant if you’ve pronounced it correctly!

Wallis, or Uvea in the local language, is encircled by a lagoon scattered with thirteen completely uninhabited islets. In just a few minutes, a taxi boat can whisk you off for a day trip to the islets, where you can laze on sublime, secluded beaches untouched by mass tourism. Pristine natural beauty and not a single resort in sight!

A world of shimmering azure waters, where you can snorkel or scuba dive in an underwater wonderland: hawksbill turtles, spotted eagle rays, sharks, parrotfish, Napoleon fish... Feast your eyes on vividly colourful anemones, sea fans and glorious corals, and discover strange creatures like spotted garden eels popping up from sandy underwater burrows! In late summer or early autumn, you can glimpse humpback whales or pygmy killer whales swimming by at sea, or see dolphins following your boat on the lagoon.

Wallis has a tropical marine climate, warm and humid, with temperatures rarely falling below 26°. Although there is only about one degree of difference between average monthly temperatures, the trade winds ensure a cool season from May to September, while the warm season lasts from October to April and is characterised by 67% of the annual average rainfall of 3.25 m.

Wallis is blessed with outstanding biodiversity, with 6 key areas listed amongst the Wallis coastal ecosystems.

Wallis is home to 3 crater lakes: Lake Lanutavake, Lake Lano and Lake Lalolalo. Lake Lalolalo, one of the largest inland crater lakes in the Pacific Region, is 80 metres deep and 450 metres across. Visitors can view the whole lake from a specially built lookout. These lakes constitute precious freshwater reserves for the island.

Nature and wildlife lovers will be treated to pristine natural beauties and rare protected endemic species. The lush and enchanting landscapes of Wallis thrive untouched by the impacts of large-scale tourism and industry, and no fertilizers or pesticides are used by local farmers.

And finally, in Wallis the natural world is visitor-friendly: no dangerous species or predators and absolutely no snakes!

Wallis offers a variety of accommodation options, from hotel to bed and breakfast. On the lookout for a place to stay? Wallis boasts three comfortable hotels, a bed and breakfast, a guesthouse and a hostel. You can stay at Hotel Lomipeau, Hotel Moana Hou or Hotel Ulukula or relax at Lausikula B&B, Océania guesthouse or Tanoa hostel.

A choice of local restaurants and snacks located throughout the island are at your disposal throughout your stay. 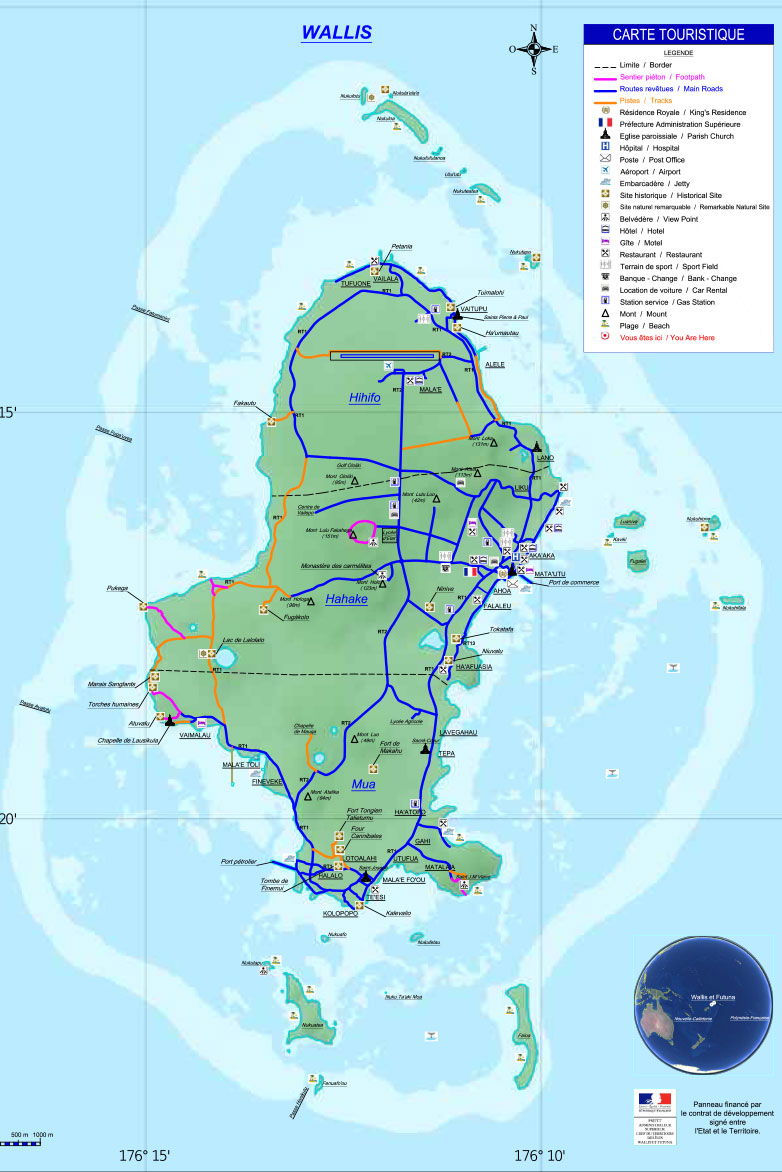 To start planning your trip, check out the sports & leisure activities, must-dos and suggested tours on the island of Uvea.